Our arteries are a living system that enables oxygen-rich blood to flow to all the organs of the body.  Atherosclerosis occurs when plaque, a combination of fatty substances that have become inflamed, lodges itself in the artery walls and limits the flow of blood. It is a process that begins in childhood and progresses over decades, eventually becoming the principal cause of heart attacks and strokes.

In men atherosclerosis consists of lumpy deposits of plaque. Women experience plaque build up as well but it is often deposited in a different way. These differences can be critical. In women:

These differences are critical because they limit a doctor’s ability to use the most widely established and well-understood procedures for diagnosis and treatment. For example, the exercise EKG (treadmill) is not good at detecting heart disease that is in only one artery. The angiogram, a process that uses dye to make bulging plaque visible on an x-ray, does not work well when the artery walls are smooth. In the smaller vessels the same dye is little more than a blur. It is the localized nature of plaque in men that makes angioplasty, stents and bypass surgery effective. Unfortunately, those procedures don’t actually cure the disease. Rates of recurrence can be high after six months or a year.

For women prevention becomes an imperative.

There are factors that will increase ones risk of developing atherosclerosis; some of these risk factors can be reduced by Transcendental Meditation practice.

Stress has been shown to influence atherosclerosis. Chronic stress increases inflammation and can upset the balance of various cardiovascular systems. Thus it comes as no surprise that the TM program, which significantly reduces stress, may be able to not only slow but reverse coronary artery disease.

“There is one non-pharmacologic, mind-body intervention program that has shown to have a dramatic effect in preventing and regressing atherosclerosis: the Transcendental Meditation technique.” —Dr. Robert Schneider, M.D., researcher

In 1996, the American Journal of Cardiology published a research study conducted at the State University of New York and Veterans Administration Medical Center in Buffalo. Individuals who already had coronary heart disease and were awaiting surgery were measured while they exercised on a bicycle. Then they participated in either the Transcendental Meditation program or a control program for one year, and were measured again while exercising on a bicycle at the end of the year. Those individuals practicing the TM program had an increase in exercise duration, which showed that their heart was functioning better. They also demonstrated positive change in ECG measures of myocardial ischemia, which is an important measure of coronary heart disease and atherosclerosis. 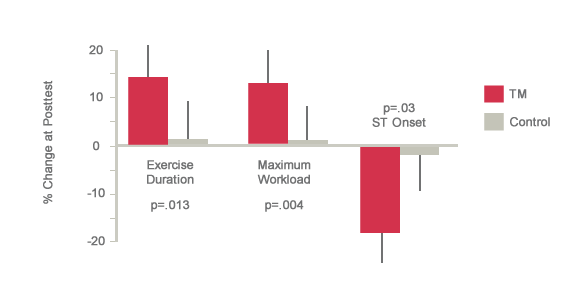 In 2000, the American Heart Association’s journal Stroke published a study in which individuals at risk for atherosclerotic cardiovascular disease learned the Transcendental Meditation technique. (In the research chart, above, the TM practitioner group is shown in the bar on the left and the control conventional health education group is shown on the right.) Those practicing the TM technique had a significant regression—an opening up of the arteries—over this one-year period a`s compared to controls. 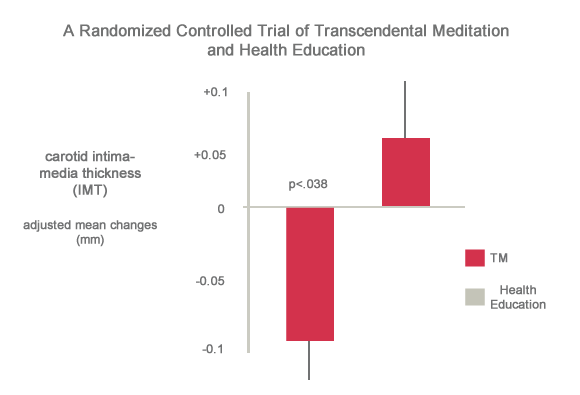 These early published studies on the TM program and atherosclerosis are historic markers, showing for the first time that a mind-body intervention could cause a significant regression of atherosclerosis.